You can find all the shows going down in Cincinnati over on the calendar page, but here are a few quick highlights for this weekend.

The Banana Twins Comedy Tour stops in where it all started. These Cincy boys have long since moved onto cities with larger populations, but they still call this place their home. Catch them at Listermann Brewing for only $5 at the door.

The boys at the Monolith Corporation are venturing into uncharted waters with a reality game show. Watch a bunch of comics get wasted on a Sunday night and try to sell their ingenious inventions to the research department of the largest multinational corporation on earth. Admission is free.

It’s an unofficial homecoming weekend of sorts. Friday night you can catch a lineup of comics who got their start at the d. w. eye Comedy Club, Cincinnati’s first comedy club, 30 years ago including Drew Hastings! Since the club closed long ago, this show will be held at the 20th Century Theater at Oakley Square. Admission is $20 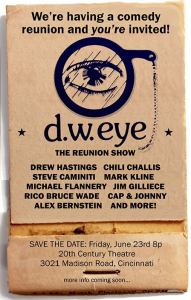 View all posts by cincystandup